In this article, we’ll explore the most notable new features and improvements offered by Nuxt 3, and we’ll also look at how most of them can be used in practice. This will provide a good overview of what’s possible with Nuxt 3 and how you can implement its goodies in your projects.

An Overview of Nuxt

Nuxt is a high-level, open-source application development framework built on top of Vue. Its aim is to speed up, simplify, and facilitate the development of Vue-based apps.

It does this by providing the following:

All these goodies makes Nuxt already a perfect choice for building Vue apps. But the good news is that, after a long delay, Nuxt 3 beta version was announced in October, 2021. This completely re-architected version promises to be faster, lighter, more flexible and powerful, offering top-notch DX (Developer Experience). Nuxt is now better than ever, and it brings to the table some really impressive features. Let’s find out what they are.

Nuxt 3 beta comes with a lot of improvements and exciting new features. Let’s explore the most notable of them.

Nitro is a new server engine build for Nuxt on top of h3. It provides the following benefits:

Nuxi is a new Nuxt CLI. It provides a zero-dependency experience for easy scaffolding new projects and module integration.

Nuxt Bridge also aims to facilitate the upgrades for the whole Nuxt ecosystem. For that reason, legacy plugins and modules will keep working, the config file from Nuxt 2 will be compatible with Nuxt 3, and some Nuxt 3 APIs (like Pages) will remain unchanged.

These were the so-called “big” features, but Nuxt 3 comes with lots more small features and improvements. We’ll explore them in the following list:

Okay, now that we’ve seen how great Nuxt is in its latest implementation, let’s see how we can use its super powers in action.

In the following sections, we’ll explore how to get started with Nuxt 3 and how to use it to implement some minimal blog functionality. Particularly, we’ll examine the following:

Getting Started With Nuxt 3

Note: before we begin, please make sure you have Node v14 or v16 installed on your machine.

We’ll start by creating a fresh Nuxt 3 project. To do so, run the following command in your terminal:

This will set up a new project for you without any dependencies installed, so you need to run the following commands to navigate to the project and install the dependencies:

And finally, to start the dev server, run this command:

Open http://localhost:3000 in your browser. If everything works as expected, you should see the following welcome page. 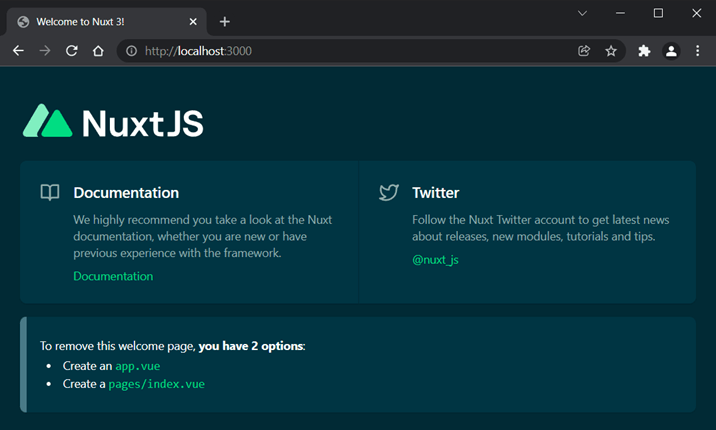 If you’re familiar with Nuxt 2, you’ll probably notice that the project structure in Nuxt 3 has been a bit simplified. 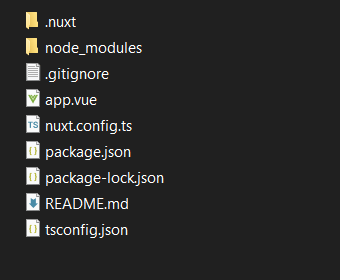 Here’s a short list exploring the most notable changes in the project structure in Nuxt 3 compared to Nuxt 2. In Nuxt 3:

Building a Minimal Blog With Nuxt 3

Note: you can explore the complete source code for this project in the Nuxt 3 Blog Example repo.

In this section, we’ll explore the basics of Nuxt 3 by building a super minimalist blog. We’ll need a bit of styling and Tailwind CSS is a great choice for that.

Including Tailwind CSS in the project

To install Tailwind and its peer-dependencies, run the following:

Now we need to generate Tailwind and PostCSS configuration files. Run the following:

This will generate tailwind.config.js and postcss.config.js files in the root directory. Open the first one and configure the content option to include all of your project’s files that contain Tailwind utility classes:

Note: from version 3, Tailwind no longer uses PurgeCSS under the hood and the purge option has been renamed to content. Please read the Content Configuration section of the Tailwind docs for more information about the content option.

The postcss.config.js file doesn’t need any configuration. It already has Tailwind and Autoprefixer included as plugins:

The next step is to add Tailwind’s styles. Create a new assets directory and put a css folder in it. In the assets/css/ directory, create a styles.css file and put the following content in it:

The final step is to update nuxt.config.ts with the following content:

And now we can use all Tailwind’s utilities in our project.

Continue reading
Nuxt 3 Beta: What’s New and How to Get Started
on SitePoint.